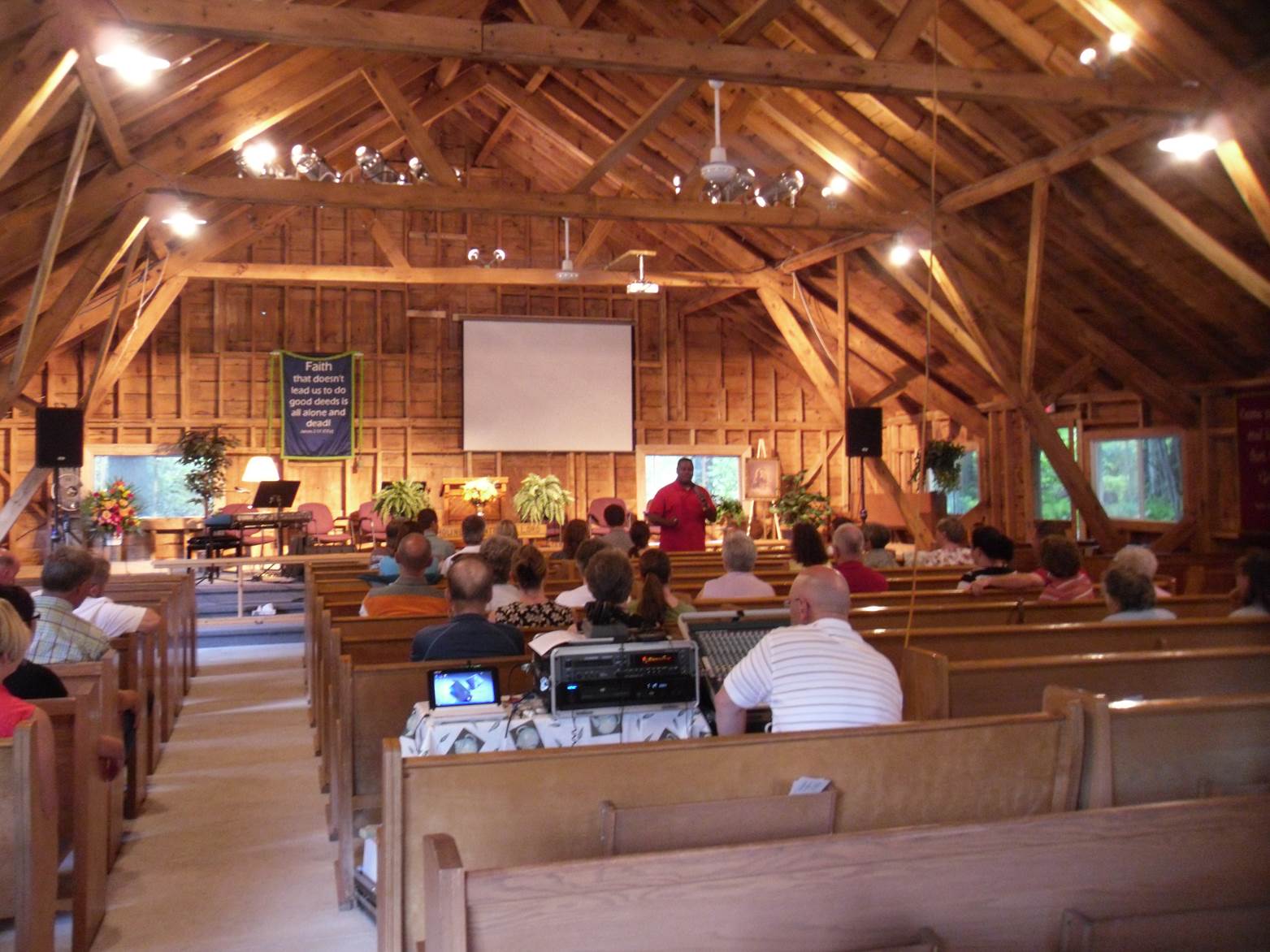 Severn Bridge became the permanent site for the Muskoka District Free Methodist Church campgrounds in 1952. This effectively ended the nomadic nature of the camp meeting season that had formerly migrated from one two to another in order to make attendance more convenient for participants in the days of travel by train and horse-drawn conveyances.

Free Methodist Camp Meetings existed over the years from Crown Hill (near Barrie) to Huntsville and points in between, such as Orillia, Gravenhurst, Housey’s Rapids and Midland. Using 1883 as a documented starting date, Bracebridge was the earliest venue for these intense ten day faith-building revivalistic meetings.

For many decades, a large tent was utilized as the camp’s tabernacle in which the services were conducted. At first, crude backless benches, made by nailing planks to blocks of wood, were used as seats. The tent was shipped via a freight train car from place to place. Later, when folding chairs were purchased, they had to be transported as well.

During these days, cooking was done on a centrally-located common wood stove. All campers were expected to bring their own food, tents and bedding straw. No reservations required! Two evangelists proclaimed the vibrant gospel messages, all the local Free Methodist ministers took a major part in the services and the only offering lifted took place during the last Sunday morning of the camp meeting.

Cartage and storage became an even greater problem as the camp meetings grew. A bigger tent, more chairs, and the decision to purchase a dining tent, tables, benches, cutlery, dishes, pots and pans, and hymn books created logistical problems for the faithful who volunteered their services.

The monumental tasks noted above, as well as the fact that the automobile came into greater usage, prompted some of the Free Methodist leaders to seriously consider buying a property on which to establish a permanent camp ground. Even though arrangements were in place to continue the use of the Goheen farm at Housey’s Rapids for the foreseeable future, in 1951 a Camp Meeting Association was formed to explore other possible locations.

A four-acre plot was secured at Severn Bridge in May 1952 at a purchase price of $2500. Although it was a mammoth task, the grounds were readied for that year’s camp meeting scheduled for early July. Pine trees that were cut down where hauled to the mill, made into lumber, and returned to be used in erecting the tabernacle, all done by volunteer labour.

Other amenities such as washrooms, a dining hall and kitchen, as well as motels and cabins eventually were built to accommodate the ever increasing number of campers.

To keep pace with the modern era, members of the camp board have encouraged greater family participation through upgraded facilities and other improvements on the property. Today’s visitor will notice an array of recreational vehicles, a swimming pool, state-of-the-art sewer and water systems that meet or surpass governmental standards, venues for children and youth and the solidly built wooden tabernacle whose unique interior charm has been recently restored to maintain its original look.

The annual Family Camp Meeting held for ten days each July brings together campers and visitors from throughout Ontario and New York State. Preaching services, gospel singing and a variety of social activities are planned with the entire family in mind.